How to Grow Potatoes

With a little knowledge and some clever techniques, you can maximise your potato crop with ease. At garden4less.co.uk we have plenty of ideas to swell your spuds, from growing in old tyres to selecting the best varieties.

If you only have a strip of rough ground, don't despair - you can still achieve a bumper harvest. Potatoes are easy to please, and will thrive in most soils. In fact, spuds are one of the best things to grow to improve the soil; the roots and regular hoeing break up compacted soil and the dense canopy of leaves is effective at suppressing weeds. However, it is worth bearing in mind that you will need to provide plenty of water during the growing season.


If you have grown potatoes before and they have ended up soft and spongy, this means they have simply become dehydrated. Thirsty plants will divert stored water away from the tubers in a drought in order to survive, but while this may save the plant, it will ruin your crop. The solution is simple: don't allow the plants to wilt or dry out, even if this means watering them every day during hot weather. 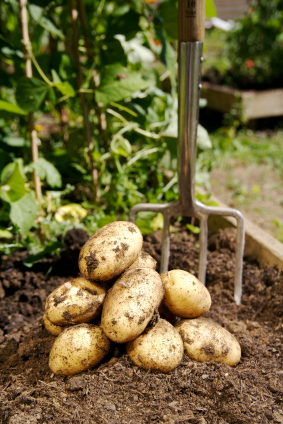 To get underway, you'll need to buy your chosen variety as a seed, basically a small potato from which the plant will grow. Give your crop a head start by chitting them before planting in the soil , this means allowing them to sprout from the eyes for a few weeks before they go outside. fresh potatoes from the garden


To help the process along, rub off all but four of the new sprouts as they emerge. This will ensure that the seed diverts its energy into producing a few very strong shoots rather than a number of weaker ones. After approximately six weeks, you will be ready to move them to their final position. Choose a warm, sunny spot in the garden avoiding potential frost pockets. Although they can be grown in almost any soil, the most successful harvest will be obtained from a well-manured and fertilized medium.


Dig a 'v' shaped trench, approximately five inches deep and plant your chitted potatoes with the shoots facing upwards. The seeds should be covering of at least three inches, but be careful not to damage the shoots as they snap off very easily. Your earlies should go into the ground in late March, and maincrop in mid to late April. If newly emerging shoots are threatened by late frosts, draw up more soil to keep them protected. When your plants are between eight and ten inches tall, you are ready to begin 'earthing up'- draw soil from either side of the row to cover the base of the plant to a height of six inches. This added depth encourages more roots to form. Early Varieties will be ready for the table in just twelve weeks after planting, whilst maincrop will be ready for storage in mid Autumn. 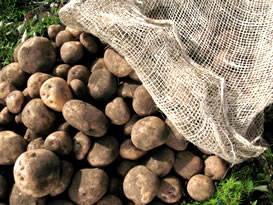 Car tyres can be a nightmare to recycle, but make excellent potato planters. In order to produce a good yield, potatoes need 'earthing up'. There is, however, a limited amount of soil which can be drawn up in a traditional plot before the mound becomes unstable.


Tyres provide an ingenious solution to this problem. Simply plant chitted potatoes in a soil-filled tyre (on the ground, or even the patio) and earth up using soil or compost. Once the tyre becomes full, add another and fill in the same way as the plant grows. Since tubers grow towards the surface, you'll end up with a deep column filled with potatoes. This is a useful technique for a small garden, as it makes the most of the vertical space available.

You may know your maincrop from your earlies but there are a few other distinctions to learn, and choosing a range of varieties from each will keep you producing potatoes all year round:

MAINCROP: Plant mid to late April. Lift in august for immediate use, or in September for storage.


Gardeners in the South of England can bring planting dates forward by a week or two, while those in the North should delay them by the same amount. First and second earlies traditionally provide new potatoes, whilst maincrop varieties produce larger tubers suitable for chipping, baking, roasting and mashing.

If you are feeling adventurous and don't mind taking a bit of a gamble, you can try for new potatoes on Christmas day. When you lift early potatoes at the beginning of summer, set a few aside. Replant them as you did previously and cover plants in September with large cloches. All being well, you should be able to lift them on Christmas eve, and enjoy tender new potatoes for your dinner