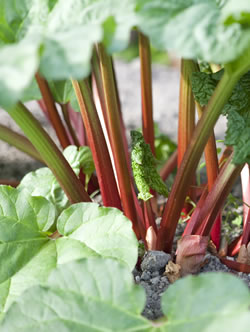 Get Started With Rhubarb

This familiar perennial plant is the staple of many traditional desserts, such as crumble and pie. Other ways to enjoy this tasty plant include cookies, muffins and in wine. Although officially a vegetable, rhubarb is prepared as a fruit, usually stewed or baked. The stems are extremely tart, so a liberal sugaring acts as a counterbalance to the sharpness. Rhubarb is extremely easy to grow and once established a single plant will last for many years to come. Our guide will get you started with this English garden favourite.

The positioning of your plant deserves careful consideration as it will last for up to ten years in the same spot. Once planted, rhubarb will not like being moved, so it would be a shame to change your mind later on! Many people grow this crop in a disused corner of the garden so it remains unobtrusive. The downside to this is that the plant ends up being forgotten. While it will put up with a great deal of neglect, just a little maintenance will result in a much improved flavour. Rhubarb will fare well in partial shade, but will do even better if you can spare it a sunny spot. You should try and avoid disturbing the surrounding soil for the lifespan of the plant, so any digging should be done now. It is a good idea to unearth any deep-rooted weeds as they will be impossible to tackle once the rhubarb gets going.

Rhubarb can be started from seed or from pot-grown rhubarb crowns. If buying ready-grown crowns (the name given to year-old plants) aim to get them in the ground by the end of autumn or in early winter. If starting from seed, sow in small pots during early spring, a greenhouse or warm window sill will provide the optimum temperature of 20-25ºC. Don't worry if nothing happens immediately - germination can take over a month. Once established, they can be hardened off and planted outside at the end of spring. When they have been transplanted to their final site the plants should not be moved again. Whilst there will be a few stems suitable for harvest in the first year, it is better to avoid picking them. This will allow the plant to put down strong roots, and you will reap the rewards later in the second year. 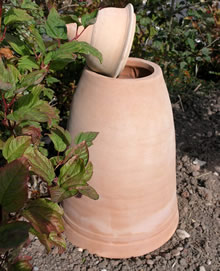 In early summer, top dress with well-rotted organic matter and water during dry weather. After about five years the rhubarb may become congested and require dividing. This can be done by splitting the roots into three or four pieces and replanting. Use a sharp spade or an old bread knife for this job. The best time of year to do this is in winter when the plant is dormant, since this will avoid disrupting new growth.

Rhubarb is much more palatable when it is forced. This is a simple process involving nothing more complicated than a large bucket. The idea is to bring the plant on quickly whilst depriving it of light. When the growing season begins, pop the bucket (or other large container) over your rhubarb and leave for approximately four weeks. You can also use a traditional rhubarb forcer, which will add a touch of rustic charm to your veg patch. The trapped heat will accelerate growth and the lack of light will create slender, tasty stems. If you live in a colder part of the country, this is also a good way to ensure a crop up to a month earlier than usual.

For a rustic-style dessert, roughly chop the rhubarb sticks into small pieces and sprinkle with brown sugar, ground ginger and a little water. Bake in a moderate oven for approximately ten minutes before serving with custard, or cover with wholemeal crumble and return to the oven until browned. Delicious!.